Welcome to LRS Foods.
"Favored by hobbyists, endorsed by professionals!" 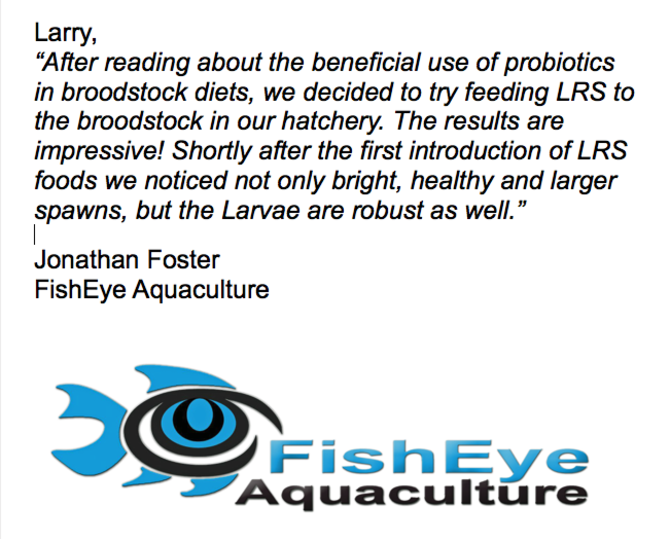 Over the past 6 years we have been researching delivery methods to ensure that live cultures of probiotic bacteria not only make it INSIDE your fish, but they also remain viable during the freezing and thawing process.

Multiple lab tests have confirmed that even after Reef Frenzy® was frozen in our freezer for 8 weeks that upon thawing the food sample contained MILLIONS of "Live" Colony Forming Units (CFU) per gram! (The final recipe was standardized at just over 1 million CFU's per gram of food.)

We are getting some very positive feedback from experts and breeders using our foods!

"I wanted to give you a heads up about a recent turn of events on my reef, involving your food. I had an outbreak of a terrible parasite, infecting nearly all my species, but infecting a goldrim/Achilles tang hybrid the worst. I haven't diagnosed the parasite, but I know it's not marine ich, as I have spent a good bit of time studying the organism under the microscope. I took me a while just to find a medication that would kill it. Hypo-salinity didn't, formalin didn't, and finally studying it at the microscopic level, I found copper at a concentration of .8 mg/L does kill it, which doing so has cleaned all my marine fish.

Regarding your food, I am confident that this Achilles hybrid would be dead without it. He was heavily infested with this parasite, breathing heavily, and I believed he was on his way out. Typically when an external parasite gets this bad, fish quickly stop accepting food. Believe it or not, he continued to accept the herbivore frenzy, right up until the copper finally started killing the parasite as it broke off his tissue. I am confident having a continuous diet of probiotic enhanced food greatly aided in this fish's recovery, and acted as his savings grace. I was pretty awe struck, when the fish was at its worst, still swimming into a cloud of herbivore frenzy eating.  This event has made me believe that your formulas could be an important link, in aiding in the recovery of heavily infested marine fish."

CLICK to Learn How Probiotics Increase Growth and Health

"Probiotics are a live microbial feed supplement which benefits the host animal by improving its intestinal balance."  (Roy Fuller, 1989)

So how do probiotics help aquarium fish?

Probiotic bacteria have demonstrated the ability boost the naturally occurring bacteria living inside the intestinal tract of the fish. These bacteria are often diminished due to the stresses of collection, shipping, medication and quarantine procedures.

By supplementing live cultures into our foods it helps the fish "get back on track" and hopefully acclimate faster to the home aquarium.

Probiotic supplementation is not a new idea and is vetted in a decade of aquaculture.

Some of the benefits are:

Production of compounds which inhibit pathogens

Beneficial bacteria out compete harmful micro-organisims for nutrients and energy​

Check out this article posted on Advanced Aquarist explaining how probiotics increase growth and health in clownfish.

What are Probiotics and why do we need them in fish food?!